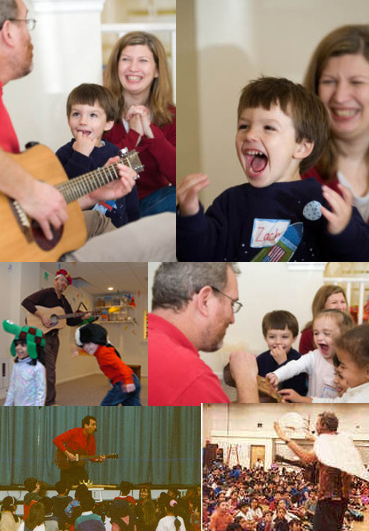 Yes the guitar guy knows songs of Katy Perry from Selena Gomez! Taylor Swift from Nicki Minaj! He even knows all the chords, and can play and sing your favorites. Kids will will use all sorts of instruments and props as we sing and play their favorite songs. Interactive, Guitar, instruments, role playing and loads of fun!

An amazing combination creates play and movement: often marching, jumping or dancing. One song mixes a bedtime lullaby with a rock and roll jumping song. In another, the ants go marching into a spider and then must duck and hide. There’s no sitting and standing with this high energy, music, comedy, singing and moving. Original material and old favorites. Teaches basic music competency, rhythmically and tonally. One of the singing/movement pieces for slightly older children challenges them to be able to sing “Yes” in one special place in the song, and “No” in another.

Then the guitar Guy does a rhythmic jumping forward and back game using the guitar. “When a superhero says ‘yes’ he jumps like this.” He then introduces the parachute and tells them it is the parachute that stops the Bat Mobile when it is going really fast.

First they play a game where they all hold the handles of the parachute and say 1-2-3- Bad guy! And everyone gets under the parachute. He tells them that sometimes superheroes have to hide from bad guys and sometimes they have to fight them. This is the hiding part.

Next they put all the balls on the parachute (one bag) and have the children try to shake them off. Next, pretend the balls are bad guys and they bounce them off the parachute. Then comes Batman bombardment. They aim at the guitar guy from behind a line and he deflects the balls with a ball his hand. Pinata game included.

Kids audition for parts in musical stories and acting the parts. The Guitar Guy is emcee, narrator, musician for a drama acted and danced by kids. The auditions are simple and humorous free-style dances. In auditioning children for the “Witch”, Guitar Guy plays rhythmic rock n’ roll and asks the other kids to use their arms and legs to put their most powerful spell on him. In the audition for “King”, another rhythmic tune is played and asks the kids to dance like a monkey (since the Witch turns the King into a monkey). There is a part for everyone, and some of them are “group parts” for children who feel more confident to be in a group. In the photo, children are “animals” in one of the drama pieces. Guitar Guy uses fun warm-up exercises to ease the kids into participating in the show.

See drawing gags, cartoons and humor quickly develop. The artist stands at a big easel, surprising folks by drawing one object, then changing it into another. Volunteers may complete pictures or offer suggestions. Drawing tips are also given. This unique show even has a song about art and colorful props. 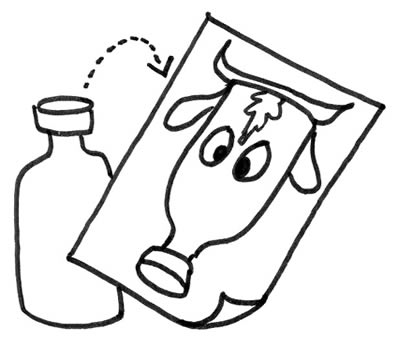 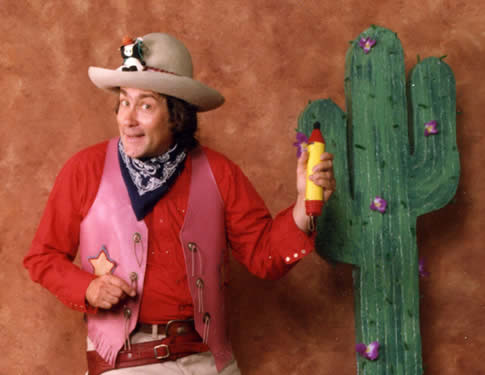